Richard Dix Web Page 
(* indicates a lost film)
To see images of vintage posters and to learn more about each movie click on the film title! AMERICAN
(1923)
*Quicksands PARAMOUNT
(1922)
*The Bonded Woman
(1923)
*The Woman With Four Faces
*Racing Hearts
*To The Last Man
*The Ten Commandments
*The Call Of The Canyon
(1924)
*The Stranger
*Icebound
*Unguarded Woman
*Sinners In Heaven
*Manhattan
(1925)
*Too Many Kisses
*A Man Must Live
*The Shock Punch
*Men And Women
*The Lucky Devil
*The Vanishing American
*Womanhandled
(1926)
*Let's Get Married
*Fascinating Youth
*Say It Again
*The Quarterback
(1927)
*Paradise For Two
*Knockout Reilly
*Man Power
*Shanghai Bound
*The Gay Defender
(1928)
*Sporting Goods
*Easy Come, Easy Go
*Warming Up
*Moran Of The Marines
(1929)
*Redskin
*Nothing But The Truth
*The Wheel Of Life
*The Love Doctor 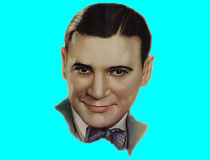 It was the death of star Wallace Reid that brought Richard Dix to Paramount in 1923. Eager to find someone to take the place of Reid's daredevil flare for action pictures, Dix was lured away from Goldwyn. He was different than Reid, more of the wholesome, All-American type. He easily conveyed the image of a strong, masculine male with a winning smile and a light-hearted attitude.

From 1923 to 1929 Richard Dix made thirty-three pictures at Paramount. Several of them are still considered important films. Chief among his output was Cecil B. De Mille's The Ten Commandments in which he essayed the role of "good brother", John McTavish, in the modern part of the film.

Dix won wide acclaim from Native Americans for his sympathetic portrayal of Nophaie in Zane Grey's epic tale, The Vanishing American. He made two other Grey westerns, To The Last Man and Call Of The Canyon. His last silent, Redskin, was filmed, in part, using the two-strip techincolor process. It remains a classic to this day.

In 1924 Richard Dix was sent to New York for nearly three years to work at Paramount's Astoria studios. He really liked New York, having worked there as an actor on the stage, and was delighted for the opportunity to head East. A straight-forward man, Dix never cared for the fake side of Hollywood publicity. He often spoke his mind with a disturbing frankness regarding press stories that passed off "bunk" as the truth about his life.


This was a particularly happy time for him. Dix first starring role came in 1924 when he played the part of Peter Minuit in Manhattan, a drama set in Hell's Kitchen. When Dix returned to California in 1927 troubling times lay ahead between the star and his studio.

Paramount did something which is still being done today. Exploiting the early work done by actors who have since become famous. In 1923, before Dix signed with Paramount, he made a picture for American Productions called Quicksands

written by Howard Hawks. Dix had a featured role as a cavalry officer in this film about drug smuggling on the Mexican border. In 1927 Paramount bought the rights to Quicksands and, hoping to make a quick buck, re-released it promoting Dix as the star! Dix was furious and demanded to buy up his contract for 1 million dollars. Cash! The studio withdrew the picture and instead of taking Dix up on his offer gave him a salary hike. He now had a contract for 52 weeks a year making 4500 dollars a week.

Anxious to make his debut in sound pictures Richard Dix grew more impatient with Paramount. They kept him making profitable silents which could be sold to the many theaters that hadn't been adapted to sound.

When his friend, producer William Le Baron,left Paramount for RKO the end of his tenure there was inevitable. Seizing one last opportunity to exploit Dix, Paramount forced him to finish out his contract with three lackluster talkies. Paramount's loss was RKO's gain...

Throughout these pages you will see
examples of title cards from the 1920's.

Before radio and television studios had
to grab an audience's attention with art!