All China is in ferment. It's hunger-mad millions surge everywhere in blind, frantic, movements. The scene is laid in Chow Luen, up the Yangtse River from Shanghai. Chow Low is too near the devastated area for safety and too far from Shanghai for help.

Jim Bucklin (Richard Dix) is the skipper of a filthy river freighter, the "Fan Tan". With his ship and a mutinous crew, he enters the little harbor one night. He goes ashore in search of food, leaving his mate and Yen (Frank Chew) in charge.

The food riots have already done their work. The town is nearly deserted but he finds Shanghai Rose (Jocelyn Lee) roaming the streets. With her he goes to a cafe where they prepare their own dinner. 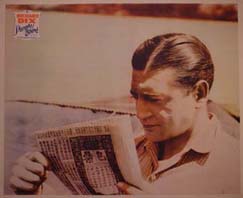 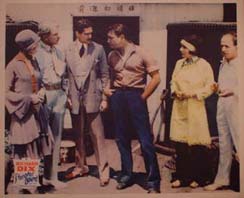 Into the scene comes a party of Englishmen and Americans, among them being Louden (George Irving) who owns the steamship line employing Jim; Sheila, his daughter (Mary Brian) Payson, the general manager, (Charles Byer) and Algy (Arthur Hoyt). Thinking Shanghai Rose and Jim own the place, they order food. Both comply, Jim not revealing his identity to them.

As they eat rioting starts. The cries of starving Chinese fill the air, and Jim takes command of the situation. He jerks the Louden party to realization of their danger. He leads them out the door to face the threatening Chinese. Payson pulls a gun and shoots. He wounds Scarface (Tetsu Komai). Jim starts the party (including Rose) on the run for the boat. Jim holds the crowd back in a desperate fight at the gangplank. 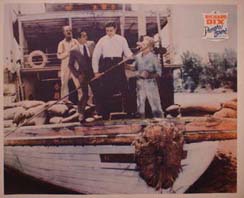 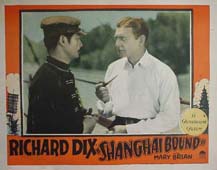 Once aboard, he finds most of the crew has deserted; Smith his engineer drunk and the mate dead. Yen is at the wheel. The "Fan Tan" starts down the river, Shanghai Bound. Ashore, Scarface swears vengence. He leads the villians by land toward the Narrows. His plan is to cut off the steamer.

Louden, finding he owns the "Fan Tan" asks for the captain. Jim says he's the captain; what the hell does he want? Jim knocks the liquor out of Smith, orders Louden and Payson to shovel coal, makes Algy work in the engine room, appoints Rose chambermaid and tells Sheila to cook. He plans to run down and meet a U.S. destroyer which is steaming up the river. Sheila refuses to cook. There is no apparent danger. But Jim and Yen know that there will be a fight at the Narrows. The others don't. Sheila demands Jim give up his command. Payson and Louden quit work at the boilers. Smith and Algy get drunk. Rose and Jim cook themselves a meal. 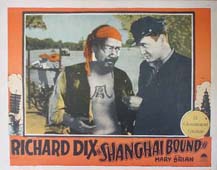 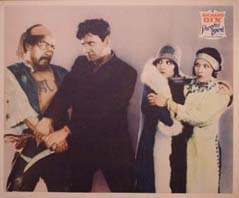 The steam pressure gets low. Yen can't steer the boat. It hits a sand bar. Sheila apologizes. She asks Jim to take command again. He knocks his make-shift crew back to their places and quickly gets the boat off the bar. Sheila tries to please him by cooking. The food is terrible but Jim, knowing she cooked it for him, eats. He loves her and he, of course, knows she loves him.

The "Fan Tan" reaches the Narrows. On each side is a sampan. Between them lies a submerged hawser*. As the "Fan Tan" strikes the hawser, the sampans are pulled in to the side of the boat. In one is Scarface, raging to kill Jim. More boats filled with Chinese put out for the steamer. Jim cuts the hawser with an axe, and one Chinese sampan floats away. Chinese in the other throw a grab-hook on the steamer's deck. Jim grabs the hook and throws it into the "Fan Tan's" paddle wheel.The sampan is pulled into the wheel. 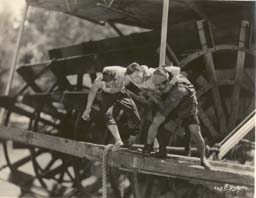 He fights with those who have jumped on board. As a destroyer is sighted Jim falls overboard. Sheila mourns for fearing him dead. < img src="images/sbstill3.jpg" image align=left>

Now that Sheila thinks Jim is dead, she knows she loves him. But he has fallen onto the debris of the wrecked wheel. Jim recovers conciousness and climbs aboard. As Sheila agrees to marry Jim, a naval officer approaches and salutes him. He calls him "Lieutenant-Commander" congratulates him on his observation work, and tells him can now resume his post on the flagship at Shanghai. Yen smiles as Jim and Sheila embrace.

*A hawser is a large rope used for towing, mooring or securing a ship*