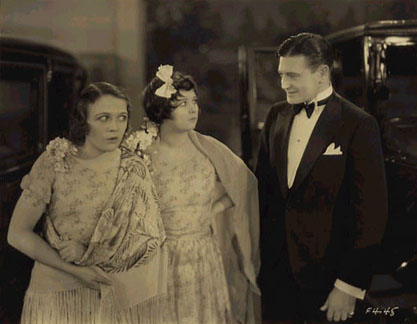 Richard Dix is just being truthful with Dorothy Hall and Helen Kane!
Nothing But The Truth

Richard Dix is the junior partner in the brokerage firm of which Berton Churchill is the senior. Dix is in love with Dorothy Hall, Churchill's daughter. Dorothy has to raise $40,000 for a charity project. She has $10,000 to start with. Her father tells her if she will double the amount he will double $20,000, making her quota of $40,000.

She tells Dix about this and gives him the $10,000 urging him to "play" it on the market so that it will yield a profit of $10,000. Dix takes the money. A few hours later Dix, Churchill, Bartels and Sparks are discussing truthfulness. Dix says that he can tell the truth for 24 hours. They take him up on it and Dix bets the 10,000 charity fund against a like amount put up by his acquiantances.

The terms of the bet are that he must tell the truth on every question put to him from 4 o'clock that afternoon until 4 o'clock the next afternoon.

In the evening the men go to a night-club. There they meet Helen Kane and Wynne Gibson, gold-digging sister act singers. Dix tells the truth when Helen asks who Churchill is, revealing him as a wealthy broker. The girls figure Churchill is their meat. They ask him to back a show for them. He stalls them. The club is raided. The girls and the men go to Churchill's home.

Next day Dix is besieged with questions about the girls, who stayed in the garage all night. Churchill's wife learns from Dix that her husband had promised to back the girls' show. She is furious. More questions are asked of Dix, and he answers them all truthfully, getting everybody into trouble. Before the 24 hours are up he will have told his boss that he is an unscrupulous business-man and a "night-life hound". He also tells a beautiful singer that he thinks her singing is terrible.

Dorothy asks him what he did the money. He manages to stall out of the answer without telling a lie. Dorothy asks him if he was in love before. He has to admit that he was, with a weight-lifting woman of the circus. He also has to admit that he was arrested. The men try to frame him into a lie so they will win the bet. He tells the truth and gets them all into worse jams. When four o'clock arrives Dix kisses the clock. He has won his money by telling the painful truth. At one minute after four he explains everything off by telling a dozen lies. Ned Sparks (1883-1957) one of the great character actors of early sound pictures. He is another of my favorite actors. He was noted for his deadpan sarcasm, darting past the perpetual cigar clenched in his teeth, in a voice that sounded like a police siren getting ready to rev up.

When Ned Sparks was 17 years old he ran away from theological college in his native Canada because he had decided that he did not choose to become a minister. He went to Dawson City, Alaska. He spent 46 weeks there and was the first dress-suit ballad singer in Alaska.

He knew the "Lady Known as Lou" and says that she was a brunet, and that she had gold teeth with diamonds set in them. He was a lyric tenor and sang in nearly all the honkey-tonks in the neighborhood.

He also sang in the joints, where goldminer "hung out" in Skagway, Juneu, Ketichikan, Wrangle, Butte and other frontier towns.

Sparks and Leon Errol were in the same company in the People's Theatee in Seattle.

In 1907 he went to New York. He appeared as a comedian with Alice Brady, Madge Kennedy, Rose Stahl, Effie Shannon, George Nash, and William Collier, Sr. Recently he and Collier were reunited when he was cast as one of the principal supports of Richard Dix in the Paramount all-talking farce, "Nothing But The Truth." Collier directed the dialog for the production.

Helen Kane in her first picture, starts auspiciously for one who has never faced the cameraman before. Her baby-talk singing and tiny, tiny voice just seem to make your heart swell up and go boom.

She has one of the comedy-purveying roles in the piece and she deals out a great brand of funny stuff. Helen is well-known everywhere through her phonograph recordings of popular ballads, done in the baby-talk manner.
Go To:
-Home -
-The Paramount Years-
-The Lost Films Of Richard Dix-