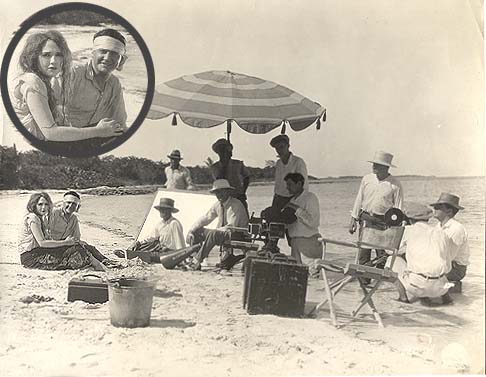 A rare production still showing Dix and Daniels working on SINNERS IN PARADISE! 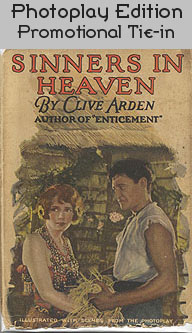 Suddenly a great wave of understanding broke over him, rendering him for a moment breathless, blinded, bewildered... Then instinctively, he raised his arms. With a little inarticulate cry the girl allowed him to hold her, trembling in her capitulation, clinging to him, submitting, without resistance, to the storm at last set free. His kisses, his arms crushed her well-nigh breathless; she was carried away by the tide of his ardor, responsive, glorying...

Barbara had crossed her Rubicon for all time. .... Presently he sat down upon the rocks, still holding her to him.

"You--came to tell me?" he whispered, his face close to hers, his eyes piercing to her very soul.

"Yes," she whispered back... ....After a time she raised herself, still in his arms.

"Alan," I--couldn't tell you before: until I felt convinced that all--was right.

You understand; don't you? It was because I loved you so, dear, not--fear, or coldness--

.... "I understand," he murmured, laying his cheek against hers. "I always understood. When, Barbara?"

.... Her head fell back upon his breast; with a little throbbing sigh, she renounced her will to his.