From 1929 to 1940 Richard Dix made twenty-six pictures for RKO. Without a doubt the most important of these is Cimarron. The film for which Dix was nominated for an Academy Award as Best Actor. If ever an actor was promoted with the perfect phrase it was Richard Dix when RKO proclaimed him "The Star Who Has Never Failed You". A consistant draw for Paramount in the 20's Dix would help bring RKO their only Academy Award for Best Picture with Cimarron in 1931.

RKO was formed in 1929, committing itself to making only sound pictures. One of the first stars it signed was Richard Dix. His old pal from Paramount, William LeBaron was the head of the studio and a safe bet for Dix that he would be treated with some respect. His first film there was Seven Keys To Baldpate. It had been filmed twice before and once again proved to be a successful property. The film and, more importantly, Dix had scored a hit!

His second Radio picture, Lovin' The Ladies (1930), teamed him with his friend and frequent leading lady from Paramount, Lois Wilson. Dix played an electrician, who is passed off as a gentleman, in an experiment to prove that any two people can be made to fall in love. During this period Dix was on par to make three to four pictures a year. Playing everything from cowboys to aviators Dix captured a permanent place in the hearts of the movie going public.

Working at RKO offered Dix the chance to play opposite some interesting actors. Among his co-stars were Lucille Ball, "Spanky" McFarland & Edna May Oliver. He starred opposite Boris Karloff in Public Defender (1931). Dix played a broker out to discover who ruined some wealthy depositors. (No, it wasn't Karloff!)

By 1932 David O. Selznick (Gone With The Wind) replaced William LeBaron as executive producer of RKO. The first film bearing his name as exec was The Lost Squadron. This film, about former World War I aviators working as stunt pilots in Hollywood, contains some of the most incredible aerial sequences ever filmed. Erich Von Strohiem played the maniacal director who terrorizes the former squadron in order to get the footage he craves. Dix, Joel McCrea and Robert Armstrong were the pilots.

Shortly after Cimarron, Dix's career seemed to move more toward standard programmer fare. Regarding his longevity as an actor he was quoted as saying, "I'll keep going as long as they want me." Always a leading man at RKO, with solid dependable work behind him, Richard Dix seems to have somehow missed the "classic" status of actors like Gable, Bogart or Cary Grant.

Fortunately, unlike his silent output, all of Richard Dix's RKO films survive. Many are offered for viewing, on a fairly frequent basis, by Turner Classic Movies and American Movie Classics. This is a great way to experience the broad spectrum of Richard Dix's film work.

Shown below are some great examples of
lobby card photography from the 1930's.

The Stingaree card is one of the
most unusual from this or any period.

Cowboys, aviators, cops & robbers!
From these lobby cards alone, you can
see what a diverse actor Richard Dix was. 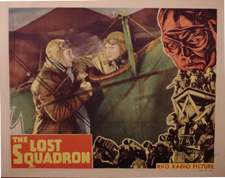 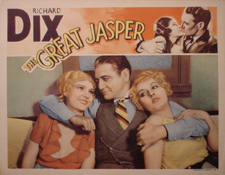 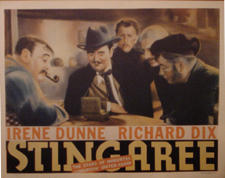 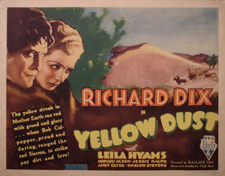 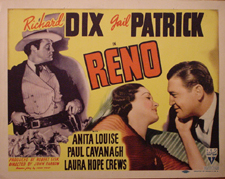 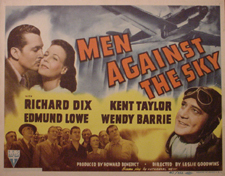 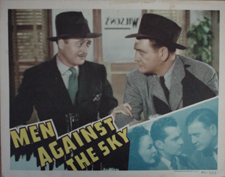 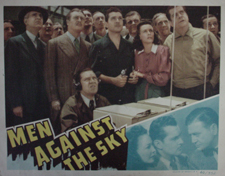 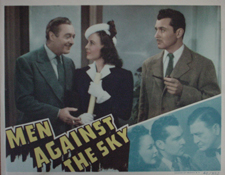 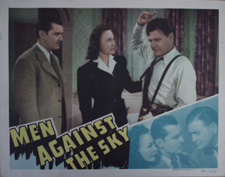 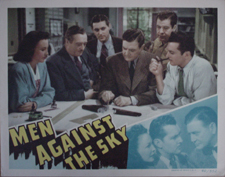 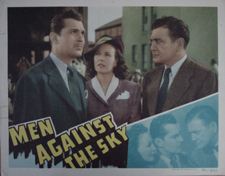 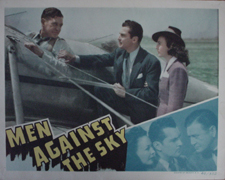 Men Against The Sky Lobby Set from 1940