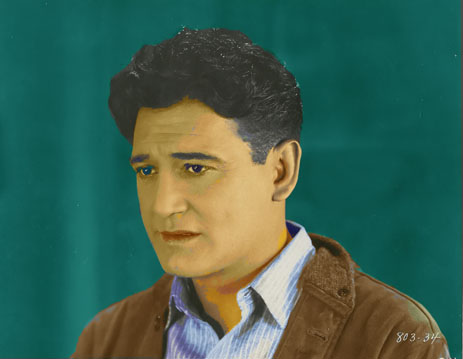 Richard Dix looks anything but lucky in this computer colorized still!

I discovered something interesting while researching this film.

The full cast list below was taken from the Internet Movie Database and shows Richard Dix's character as Randy Farnum.
This was checked against The Moving Picture World from July 18, 1925.

The available print of The Lucky Devil, with Paramount credits, lists Dix's character as Bill Phelps!

The characters played by Esther Ralston and Edna May Oliver are listed with the last name of "Kent" not that of McDee.

The Sheriff is listed as "The Constable" and The Professor as "The Bicycle Man".

The Lucky Devil
The Lucky Devil exists in an edited fifty-three minute version. It had been made available, in this length, for early film collectors!

Some scenes were either pared down or completely edited out.

The following description comes from watching the edited home version of the film.

It's interesting to note that the words dammit and hell were used in the original inter-titles! ....."Give me and open road, an open throttle and a bed 'neath the open sky--" 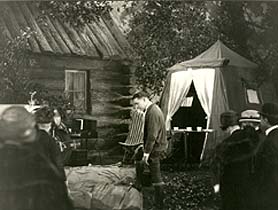 Bill Phelps feels the same as Anonymous does but being employed in Franklyne's Department Store, as a demonstrator for the Complete Camper's Outift, is as close to the great outdoors as he has ever come. Bill longs for a big auto featured in the display and figures if he ever owned it he would head for the wide open spaces! 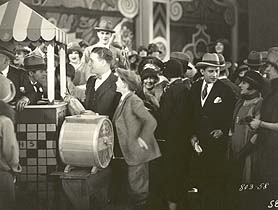 Franklyne, Sr., the Department store owner, disliked the car as much as Bill adored it. Seems his son, Franklyne, Jr. has been in trouble with cops or women ever since he got the car. Franklyn, Jr. tells his dad that the car is a hoodoo which is why he loaned it to the camping exhibit until his bad publicity dies down. Unbeknownst to Junior, Senior has donated the camp exhibit to the Girl Scouts annual raffle! He decides the car can go too. 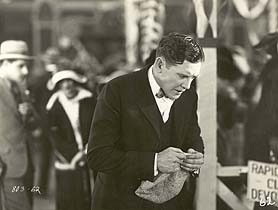 With the camping outfit going to the Girl Scouts, Bill Phelps is out of a job. That doesn't prevent him from spending half his savings on fifty dollars worth of raffle tickets. Amazingly his lucky ticket, 313 is the winner! Junior warns him that the car is a hard luck piece and that he should stay away from cops and women. Bill states that he is going straight out of town and away from both. Bill, thinking he has the car in forward immediately backs the car out of the building and into a gang of cops! 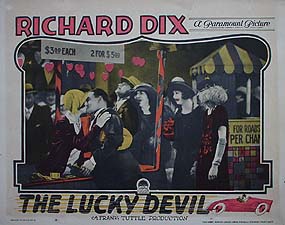 Doris Kent and her Aunt Abbie are headed West to visit Doris' uncle Tobias, who is Nampas awaiting their arrival, so Doris can claim her right to her uncle's fortune. Bill Phelps arrives at the motor camp and sees Doris, completely forgetting Franklyne Jr.'s warning about cops and women. He offers to help get their fire started. Doris is immediately smitten. Her aunt, unfortunately, is not. 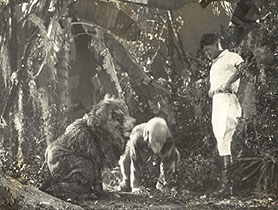 Bill's inability to pitch his tent properly sparks an inquiry from Doris as to why. Bill offers that he learned this technique from the Webfoot Indians. Doris was sure Bill has had many adventures and asks him to tell her a few. With his honest answer, that he hasn't had that many, she becomes a bit distant. Not wanting to ruin his chances with her he tells about the time he was hunting in the Tasmanian jungle during the banana famine of 1922. 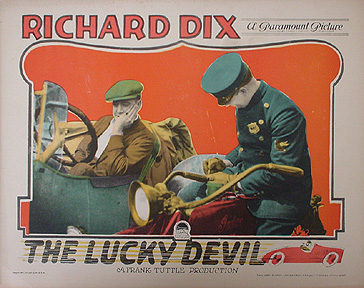 While Bill regails Doris with tales of his wrestling a lion which was refereed by a giant monkey, Aunt Abbie makes the mistaken discovery that the handsome stranger is the womanizing Rudolph Franklyne, Jr. At the same time Doris tells Bill that she and her aunt have sold everything on the chance of inheriting her uncle's millions. When Doris returns to her camp her aunt show her the discovery and tells her they are leaving first thing in the morning. 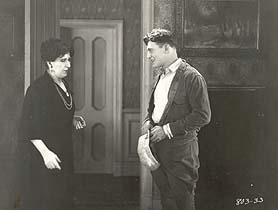 Bill, finding them gone, speeds off in an attempt to catch up. He is stopped for speeding by a policeman and given a forty-five dollar speeding ticket. He tries to bribe the cop who raises the ticket to fifty. The cop tells him that he can't leave town until Monday. When his car breaks down a man on a bike stops by to help. Seeing Bill's wallet hanging out of his coat the man takes it! Bill stops for gas and after the attendant puts some gas in the tank Bill discovers his loss. The attendant takes the fancy radiator cap and a few other bits to make good on the gas. 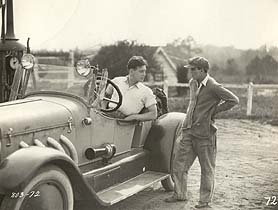 Later, when his car runs out of feul he spots Doris and her aunt on the side of the road having car trouble. He offers to tow them to Nampa if they can give him some of their gas. In Nampa Doris and her aunt elude Bill at the garage, finding a hotel in the quiet part of town. 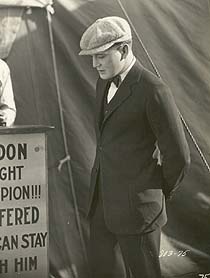 He finds the same hotel but, without funds, has little hope of staying there until Aunt Abbie, in an effort to disuade the owner not to rent to him, tells her that he is Rudolph Franklyne, Jr. and that he has more money than morals. Naturally the landlady is impressed by this and never questions him, showing him the room across the hall from Doris and her aunt.

Doris along with Abbie find the estate her uncle spoke of. Uncle Tobias sees them but when he approaches tells them he can't speak of the inheritance because today he is and elephant! He then prances off thinking he's an animal. That's when they realize Uncle Tobias is insane! 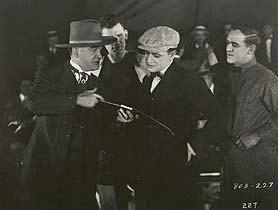 After a week stuck in Nampas, Doris decides to sell her car so they can get out of town. She runs into Bill in the hallway and she tells him her troubles. He makes a decision to sell his roadster to help her out. At the garage the man there convinces Bill to let him race his car at the fair grounds so they can split the ten thousand dollar prize. But where to get the one hundred dollar entry fee?

At the Fair Grounds the next day Bill discovers that if he can go two rounds with boxer Sailor Sheldon he can win two hundred dollars. He takes quite a lashing from the Sailor but manages to go the distance to win the prize! On his way to pay the entrance fee for the race he sees the man who robbed him. He chases the old man down and gets his money back just in time for a cop to see him take the money. 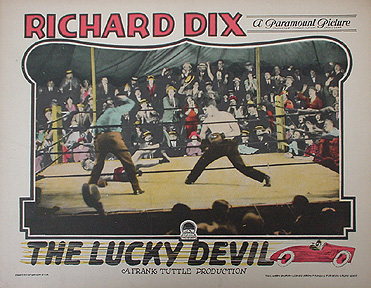 The cop thinks Bill's the one doing the robbing. The old man, money in hand, tells the cop he won't prosecute. The thief takes off and the cop knocks Bill to the ground. Doris happens upon the scene and helps Bill who is laying on his back, dazed. 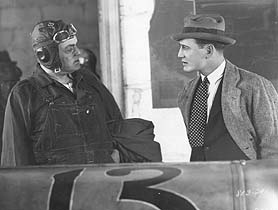 The race attracting people from all over has attracted the Franklynes as well. When Doris sees them in the lobby her attitude toward Bill changes realizing he's not the womanizer her aunt feared he was. Doris tells Bill she has paid his fee for the race by selling her car. She also tells him to slip out the back so the landlady, Mrs. Hunt, doesn't see him. Mrs. Hunt, learning that Bill is entered in the race, is afraid he'll get killed before she can get the money he owes her. She calls the Constable to tell him about Bill.

When Bill gets to the garage he notices that his car has the number 13 on it! His driver sees the competition roll up and fearing for his life quits on the spot. Bill determined to make a go if it decides he's going to run the race anyway. The old constable shows up telling him that he's got orders not to let the car out of his sight. Bill tells him to come along and starts off for the races. Meanwhile Mrs. Hunt is threatening Doris and Aunt Abbie with jail over their unpaid bill. Doris sees Bill drive by the hotel and she her aunt leave to watch Bill take his chances. 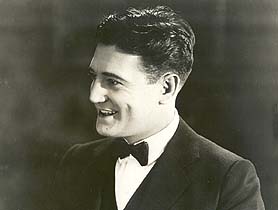 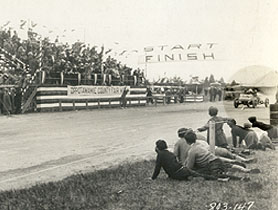 With Doris and Aunt Abbie seated in the front row and the Franklynes watching too, Bill gets off to a rousing start by stalling. Then the race is on. The Constable gets into the spirit of things by plugging up the gas tank with his gum when some kids accidently shoot a hole in it. The race is hard fought with spills, chills and mile-a- minute-thrills. Despite crooked work on the part of other drivers Bill finally gains his lead. When his gears are stripped in an accident, avoiding a child in the road, it looks as if all hope is lost. The Constable tells him to try reverse. It works and Bill manages to win the race by crossing the finish line backwards! He also wins Doris as well! 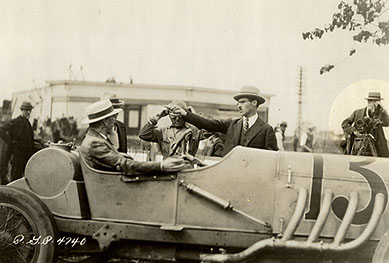 Getting a little direction!
*Note: The cameraman highlighted to the right. 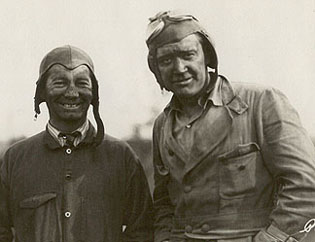 Can any NASCAR fans out there identify this man with Richard Dix?
Go To:
-Home -
-The Paramount Years-
-The Lost Films Of Richard Dix-