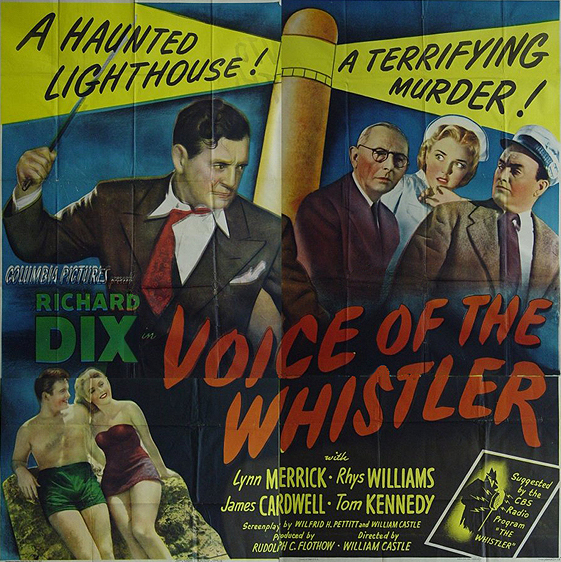 Voice Of The Whistler
(Working Title:
Checkmate For Murder)


Midas-like wealth fails to give John Sinclair (Richard Dix), industrialist, either, health or frieends. After one of his recurrent attacks, his physician advises him to take a vacation. He leaves for the Great Lakes.

Arriving in Chicago, Sinclair boards a cab for the dock but is taken ill while in the machine. The cabbie, Sparrow (Rhys Williams), befriends him, taking Sinclair to his own quarters.

At Sparrow's insistence, Sinclair visits a neighborhood clinic for a check-up. There he meets Joan Martin (Lynn Merrick). Joan is engaged to Fred Graham (James Cardwell), a young interne, who has asked her to wait until he becomes established before they get married.

Clinic physicians, informing Sinclair he has only a few months to live, advise him to go to the Maine seacoast. He makes Joan an offer -- that she marry him and that in return for the short time she will have to spend with him he will leave her his entire fortune. When she accepts, Fred fails to understand that she really is doing it for him, planning to give him the money-after Sinclair's death.

Sinclair, Joan and Sparrow go to Maine, taking up residence in an abandoned lighthouse, converted into a beach home. The bracing sea air and the companionship of Joan and Sparrow work wonders on Sinclair, who seems to regain his health, He finds himself actually falling in love with Joan. Six months pass and he is about to tell Joan of his love when she tells him that, unable to stand the loneliness of the retreat, she will have to leave. Sinclair offers to do anything to keep her with him.

Fred arrives to visit Joan, and Sinclair sees that they are still in love.

Sinclair urges Fred to stay with them until they close the beach home and move back to the city. During a game of chess, Sinclair outlines to Fred, in facetious manner, how he would go about murdering him if he so desired.

Realizing that when Sinclair takes Joan back to the city with him she will be lost to him (Fred) forever, Fred decides to carry out Sinclair's murder plan, with Sinclair the victim.
Stealing into Sinclair's bedroom, he grabs a fireplace poker and brings it down viciously on the form in the bed. He hears only a muffled thud. The supposed figure of Sinclair proved nothing more than pillows and blankets arranged to simulate a sleeping form.

Sinclair, who had been hiding in the shadows, steals up behind Fred and clubs him to death. He wants to toss the body from the lighthouse window to the rocks below to make it appear that Fred, walking in his sleep, fell from the portal and was killed. But the window fails to open. Planning to return and open the window later, he carries the body down to the rocks and then knocks Fred's head in with a boulder.

En route back to the lighthouse, Sinclair bumps into Sparrow. He tells Sparrow there has been a terrible accident -- Fred has fallen from one of the windows. Sparrow says that is impossible, because all the windows were nailed shut. Joan, who saw Sinclair carry the body out, has summoned the police. Sinclair dies in the electric chair.
- Home -
The Paramount Years - At RKO - The Other Studios
Cimarron
-The Lost Films Of Richard Dix-
-The Whistler Series- Credits this page from the Columbia Studios Press release.