In smoothing a quarrel between his sister Pat and her fiance (Noah Beery, Jr.) Don gets involved in a plan to boost production of the fiance's aircraft plant by enlisting spare time help of Don's junior college cronies.

The plan works so well that the plant wins the Army-Navy "E" award, and the kids stage a musical show in celebration.

Climaxing the pennant award exercises, Don is called upon to make a speech. He is taken by surprise at the unexpected turn in events but experiences genuine pride-tinged with embarrassment - when Lieut. Commander Tom Warren, his father, steps out to present him with an honorary Navy pin for his services in initiating the idea.

Don gallantly includes Connie in the honor and she, in turn, rewards him properly.
RICHARD DIX STARS WITH LILLIAN GISH IN TIMELY 'TOP MAN'
(from the TOP MAN Pressbook) 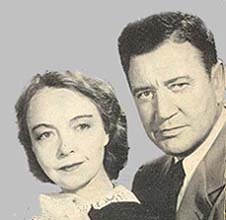 Over 20 years ago at the old Morosco theatre in Los Angeles, Richard Dix was the popular leading man with the Oliver Morosco stock company.

The famous Gish sisters, Lillian and Dorothy, appeared regularly every Sunday matinee, occupying the same second row aisle seats at each performance. "We were flattered at their interest," Dix recalls, "and I suspect the entire company played directly to them."

By one of Fate's ironic quirks, Lillian Gish and Richard Dix never met until years later. That happened when they were introduced during the making of Universal's "Top Man."

Credits this page from the Top Man pressbook.