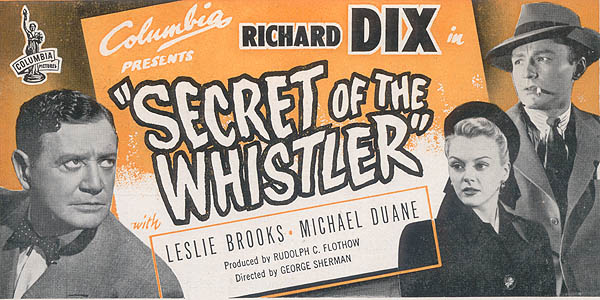 Secret Of The Whistler
Ralph Harrison (Richard Dix), an artist married to an ailing but wealthv woman, becomes infatuated with Kay Morrell (Leslie Brooks), an artist's model. Edith Marie Harrison (Mary Currier), Ralph's sick wife, is unaware of her husband's infidelity. While under a specialist's care, Mrs. Harrison recovers sufficiently to allow her to pay a surprise visit to Ralph's studio, where she overhears her faithless husband making love to Kay. The shock of her discovery nearly kills her.

Later, Edith accuses her husband of infidelity and threatens to strike his name from her will. Ralph plans to kill her before she can make good her threat. He sneaks into her bedroom that evening, and thinking her to be asleep pours a few drops of poison into her medicine bottle. But Edith only pretends to be asleep and watches him. She notes the incident in her diary. Edith subsequently dies of a heart attack, but Ralph, suffering from a guilty conscience, believes he has killed her. Three months later Ralph marries Kay.

Ralph's torment mounts as the story of a murder breaks in the newspapers, the circumstances of which are similar to his own. Ralph goes on a frantic search for his dead wife's diary. He finds it, but he finds nothing in it that would point suspicion at him. He does not know that the diary's tell-tale page is in Kay's possession. Soon, Ralph learns of Kay's intention to turn him over to the police. Pretending to embrace her, he strangles her. Ralph, ironically, is held for a murder which he need not have committed since the police find that he was innocent of his first wife's death.

Today, as when, a good many years ago, he was the popular leading man of the famous Morosco Stock Company, Richard Dix is the arch-type of the he-man.

Currently starring in Columbia's "Secret of the Whistler," sixth in the studio's series of highly praised "Whistler" pictures, Dix has, ever since his stage beginnings, maintained his hold on the popular imagination. He has been in pictures for over 20 years, and today, there are innumerable fans who regard a Dix film as a 'must.

When he was a boy, back in St. Paul, Minnesota, his father wanted him to be a surgeon. That didn't appeal to young Richard, so he tried banking, only to find it dull. Work in an architect's office was the next try, and that appealed no more than banking.

All this time, there was a dream in the back of Richard's mind. What he really wanted to do was act. With medicine, banking and architecture all out, he enrolled in the Northwestern Dramatic School evening classes, and, possessed of both talent and virile good looks, soon won a berth in a local stock company. New York beckoned, and in 1917, he made his Broadway debut in "The Hawk" with William Faversham.

Talking about his career, Dix says that he's had innumerable lucky breaks, and adds,"If I hadn't had, I wouldn't'have been in the game this long." One of his lucky breaks was becoming leading man of that above mentioned Morosco Stock Company on the west coast.

Attention from motion picture producers was inevitable. Sidney Franklin gave Dix his first screen opportunity in "Not Guilty." The year was 1922, and ever since, the name of Richard Dix has been familiar to filmgoers.

A person-to-person meeting took place recently in Hollywood which climaxed a record long-time, long-distance association when Richard Dix, star of "Secret of the Whistler," met Hal Revine, organizer of the first Richard Dix fan club, who resides in Ottawa, Canada.

Revine started the first Dix fan club 21 years ago in Ottawa, and developed it into a world-wide organization having a membership of more than 5,000 fans.

The Ottawan, while visiting relatives in Santa Monica, was invited to the Columbia star's ranch near Topanga Canyon and then taken by Dix on a personally conducted tour of the film capital.

"Richard Dix and Hal Revine, two pals of long standing, at the corral fence, admiring the Dix string of fine saddle horses. Incidentally, the favorite of the motion picture star, "Apple", was ridden by his Canadian friend."

Credits this page from the Secret Of The Whistler pressbook.