In the Oklahoma land rush, April 22, 1889, is a picturesque attorney-editor, Yancey Cravat (Richard Dix). At the sharp report of the starting pistol, the nondescript thousands rush forward, afoot, horseback and in animal drawn vehicles. Yancey's pony races beside that of a young girl, Dixie Lee (Estelle Taylor), They outdistance the others. The girl, through trickery, secures the piece of land Yancey wanted -- leaving him empty-handed.

He returns to his home in Wichita, and announces that he and his family will move to the new Oklahoma settlement. The wife, Sabre, (Irene Dunne), in spite of vigorous objection, goes with him.

Nine days later the Cravats, with their son, "Cim," (Douglas Scott) and Isaiah, Negro boy (Eugene Jackson) arrive in the boom town of Osage, only to learn it is an unhealthy place for editors -- one having been recently assasinated. Yancey promptly notifies the citizens that he will expose the murderer in the first edition of his paper. 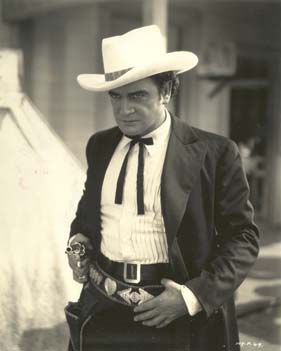 Lon Yountis, (Stanley Fields) suspected of the murder playfully shoots a hole through Yancey's hat, as he walks with Sabra. Yancey answers with a hole through the "bad man's" ear. The feud climaxes the following Sunday with Yountis' exposal and death at the hands of the new editor.

Sabra is speechless with horror as she notes that her husband files a sixth notch in his revolver handle.

A year later many things have happened to the Cravats. A daughter is born to them. Yancey's editorial dictatorship is accepted. "The Kid," a notorious outlaw, attempts to rob a bank in Osage but is killed by Cravat, who spurns the $10,000 reward much to his wife's dismay.

Three years later Yancey unexpectedly rides away to ride in the opening of the "Cherokee Strip," leaving his family behind.

In 1898 he returns in the uniform of a Spanish-American war veteran. Hardly has he embraced Sabra, who is now a powerful political figure, when he rushes to the public defense of Dixie Lee. The latter is being tried on a public nuisance complaint preferred by Sabra. At Dixie's acquittal, Sabra is bitter toward her husband -- but not for long.

Nine years later, in 1907, Oklahoma is admitted to the Union. Indians, because of oil found on their lands, have become fabulously wealthy. Inter-marriage has raised them to social equals of the whites. Yancey Cravat, the crusader, feeling that his work for the Indians is finished, disappears.

Sabra, in spite of her hungry heart, grows more powerful as an editor and Congresswoman.

A Congressional party visits Osage to attend the unveiling of a memorial to the Oklahoma pioneer. Sabra takes them to view the oil fields. A gusher comes in with a swishing roar.

Word spreads that the nitro-glycerin torpedo has been forced up by the premature flow of the oil, and the lives of the entire party have been saved by an unknown man, who suffered fatal injuries in the attempt.

Sabra hears that the hero is known as "Old Yance."

She rushes through the sea of oil, and takes the crumpled form of Yancey Cravat in her arms. As he dies, his statue is being unveiled in the town of Osage.

In a brief internet interview from 2001, Robert Dix, Richard's son, stated that Cimarron's Yancey Cravat, was his father's favorite role.

In an undated letter from 1930 Dix wrote... "I like to play parts like in "Shooting Straight". I am really very much interested in my new role in "Cimarron", however, and feel that it is one of the best that I ever had."

And in a letter dated March 16, 1931, sent to a fan, Miss Agnes Colby, of Soiux City Iowa, Dix wrote, "The part of Yancey Cravat was a pleasure to do, surely. There is no need of explaining what it meant to me..."

Richard Dix was noted for his straight forward attitude toward publicity. Though we may never know for sure, much of the following quote from the RKO Cimarron pressbook certainly seems like it would have come from Dix. Whatever it's source, it could certainly be argued that someone was speaking with incredible foresight!

"While I believe that Edna Ferber's "Cimarron" affords me the greatest role of my career, I dislike to say so," says Richard Dix in speaking of his latest screen portrayal -- Yancey Cravat ...

"It is hardly fair to compare a talkie role with a silent one," he explained.

"I have a soft spot in my heart for 'The Christian' and 'The Vanishing American,' my best two characterizations out of fifty (sic) silent pictures."

"So I prefer to let them stand on their silent merits."

"In 'Cimarron,' for the first time in my life, I portray a man's gradual deterioration over a period of forty years. I also was given the task of creating the sympathy, glamour, color and mystery of the Edna Ferber hero already enshrined in the hearts of millions of readers."

"I never worked so hard in my life -- or enjoyed a role more. I never expect to have a greater part."

Those associated with the star during the filming of "Cimarron" know that he actually lived the hectic life of Yancey Cravat -- menatally at least.

"No role in screen history has demanded such versatility," is the way Wesley Ruggles, director of "Cimarron" expressed it.

"To begin as a romantic, picturesque figure of 30 and gradually deteriorate in character and physique into a besotted, grimy oil worker at 71, and still retain audience sympathy and a certain heroic glamour, is to do the superhuman," he said.

For two months before production started he talked, planned, ate amd slept over the story details of Yancey Cravat's life. He allowed his jet black hair to creep down his neck, he lengthened his stride several inches, his shoulders were held more aggressively, and in general fell into the moods of the Ferber hero.